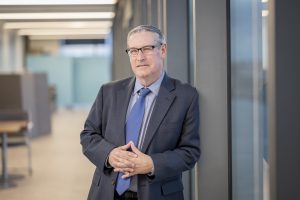 Jack Speer has extensive experience in both radio and television news.His work has ranged from coverage of stories of strong national import, including the Sept. 11 terror attacks, to feature stories like spending a day with one of the last door-to-door Fuller Brush salesmen. During more than 20 years at National Public Radio in Washington, D.C., Jack has also worked as a business correspondent filing stories from around the country and as a morning and afternoon anchor for the network.

Currently Jack works as an anchor for NPR’s afternoon program, “All Things Considered.”

During a more than 30-year broadcast career his work has also included on-camera television work for WUSA Channel 9 and work for major market radio stations in Washington, D.C., Cleveland, Ohio and Trenton, N.J.

In addition to his extensive broadcast work Jack is also an accomplished public speaker, conducting lectures at universities and hosting a number of Smithsonian on the Mall programs.

Jack has been awarded a Masters of Arts Degree under the Returning Journalist program at the University of Maryland in 2013.

He is also an adjunct professor at the Johns Hopkins Carey Business School, where he is currently teaching Business Communications at the graduate level.

As an active national member of the American Federation of Radio and Television Artists SAG-AFTRA he currently serves on the national and local boards of the union, plus a number of national committees.

Jack lives in Maryland with his wife, Colleen Allen, and two children, Robert and Annie.